Symptoms of Seizures: Symptoms that May Indicate a Seizure Disorder 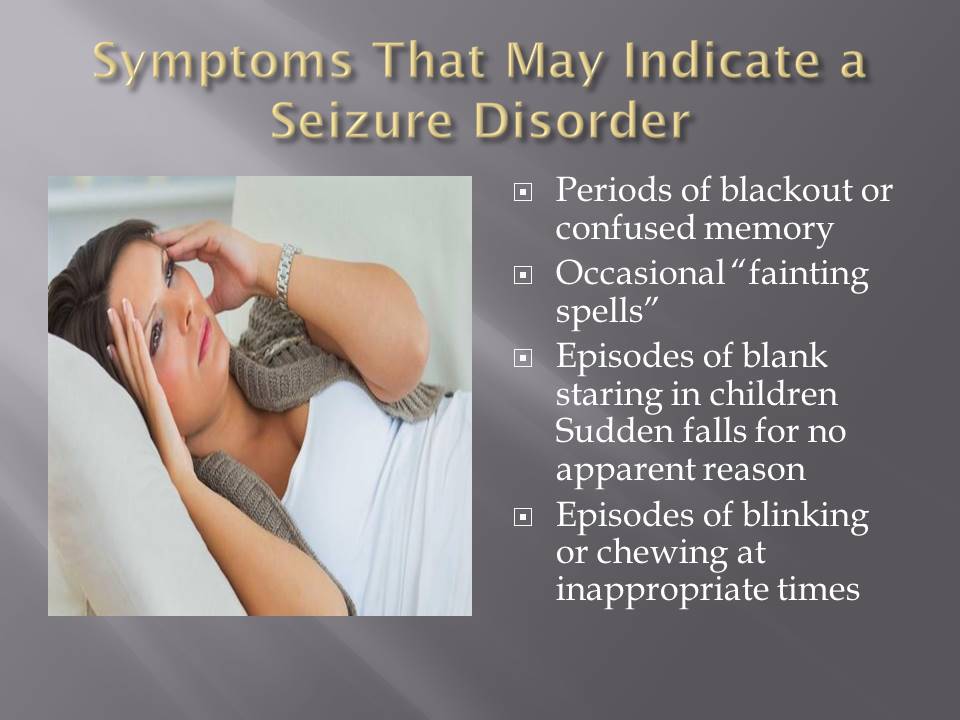 Seizures are changes in the brain’s electrical activity. This change can cause dramatic, noticeable symptoms or it may not cause any symptoms. The symptoms of a severe seizure include violent shaking and a loss of control. However, mild seizures can also be a sign of a significant medical problem, so recognizing them is important. Because some seizures can lead to injury or be evidence of an underlying medical condition, it’s important to seek treatment if you experience them.

What are the types of seizures?

Types of seizures include the following:

Non–epileptic seizures result from an injury, such as a blow to the head, or an illness. When you get treatment for the condition, the seizures go away.

These seizures can occur if you have epilepsy, which is a condition that causes repeated seizures. This type of seizure happens on only one side of the brain. As a result, one side of the body is affected by a seizure. Other names for partial seizures include focal, Jacksonian, and temporal lobe seizures.

Petit mal seizures are another type of generalized seizure. They’re also known as absence seizures. These seizures have few physical symptoms but may involve staring off into space for several seconds. If you have an absence seizure, other people can’t get your attention during the seizure.

What are the symptoms of a seizure?

You can experience both partial and generalized seizures at the same time, or one can precede the other. The symptoms can last anywhere from a few seconds to 15 minutes per episode.

Sometimes, symptoms occur before the seizure takes place. These include:

Symptoms that indicate a seizure is in progress include:

Seizures can stem from a number of health conditions. Anything that affects the body also may disturb the brain and lead to a seizure. Some examples include:

Seizures can run in families. Tell your doctor if you or anyone in your family has a history of seizures. In some instances, especially with young children, the cause of the seizure may be unknown.

What are the effects of seizures?

If you don’t get treatment for seizures, their symptoms can become worse and progressively longer in duration. Extremely long seizures can lead to coma or death.

Seizures also can lead to injury, such as falls or trauma to the body. It’s important to wear a medical identification bracelet that tells emergency responders that you have epilepsy.

How are seizures diagnosed?

Doctors can have a difficult time diagnosing seizure types. Your doctor may recommend certain tests to diagnose a seizure accurately and to help ensure that the treatments they recommend will be effective.

Your doctor will consider your full medical history and the events leading up to the seizure. For example, conditions such as migraine headaches, sleep disorders, and extreme psychological stress can cause seizure-like symptoms.

Lab tests may help your doctor rule out other conditions that can cause seizure-like activity. The tests may include:

Imaging scans such as a CT scan or MRI scan also can help by providing a clear picture of the brain. These scans allow your doctor to see abnormalities like blocked blood flow or a tumor.

How are seizures treated?

Treatments for seizures depend on the cause. By treating the cause of the seizures, you may be able to prevent future seizures from occurring. The treatment for seizures due to epilepsy include:

With regular treatment, you can reduce or stop seizure symptoms.

How do you help someone who is having a seizure?

You should clear the area around a person who’s having a seizure to prevent possible injury. You should place them on their side and provide cushioning for their head.

Stay with the person, and call 911 as soon as possible if any of these apply:

It’s important to remain calm. While there’s no way to stop a seizure once it’s begun, you can provide help. Here’s what the American Academy of Neurology recommends:

After the seizure, you should do the following:

Tips for living with epilepsy

It can be challenging to live with epilepsy. If you have the right support, it’s possible to live a full and healthy life. Here are some coping tips:

Tips for caring for someone who has epilepsy

If you live with someone with epilepsy, there are some things you can do to help that person cope with their condition:

If you need help, reach out to their doctor or an epilepsy support group. The Epilepsy Foundation is another helpful resource.

How can you prevent seizures?

In many instances, a seizure isn’t preventable. However, maintaining a healthy lifestyle can give you the best chance of reducing your risk. You can do the following:

If you’re on medication for epilepsy or other medical conditions, take them as your doctor recommends.

Previous PostDoes a Full Moon Have an Effect on Your Epilepsy and Seizures?
Next Post Who Gets Epilepsy? These Risk Factors Give You a Higher Chance of Developing Epilepsy