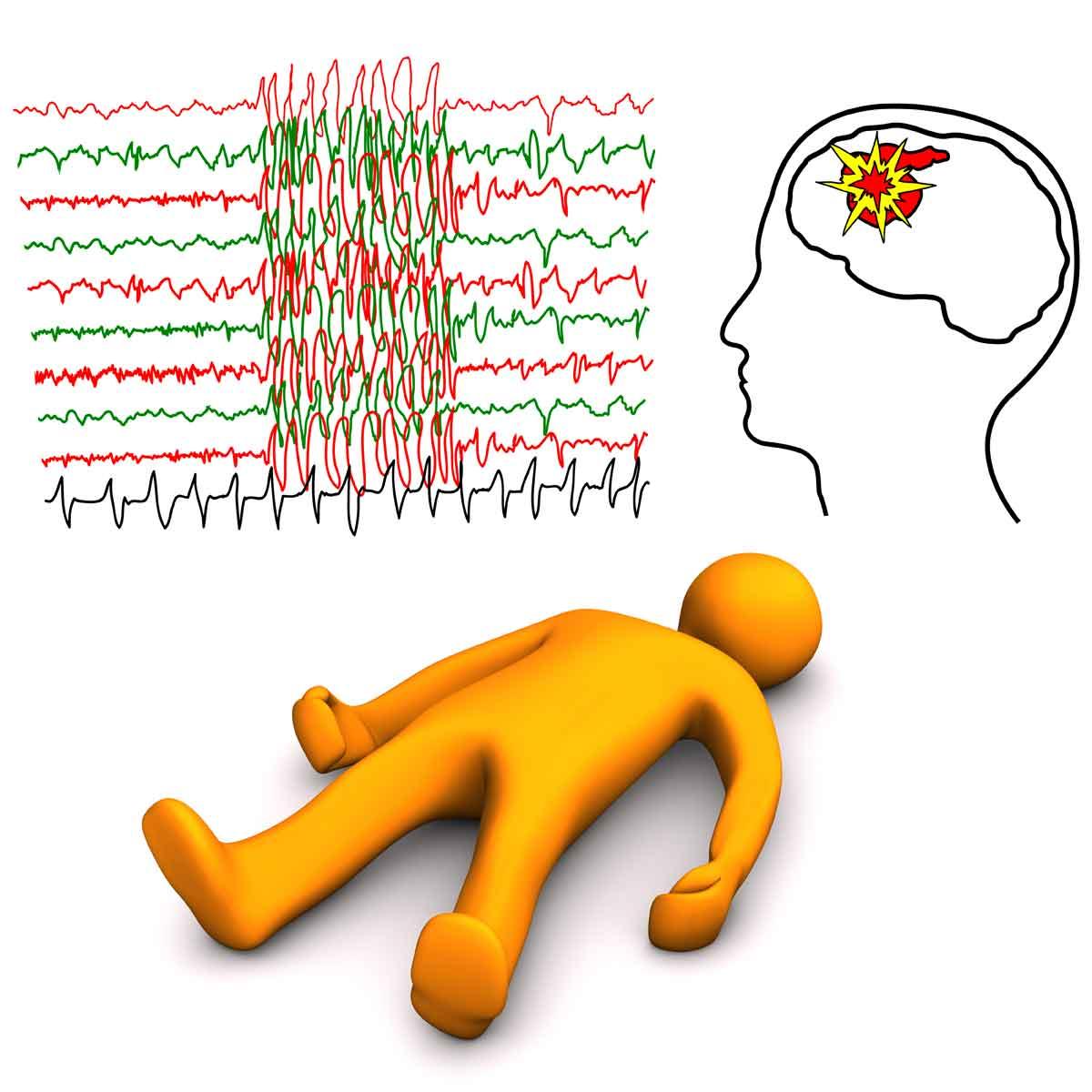 Mild head injuries, such as a concussion with just a very brief loss of consciousness, do not cause epilepsy. It may seem obvious that heredity (genetics) plays an important role in many cases of epilepsy in very young children, but it can be a factor for people of any age. For example, not everyone who has a serious head injury (a clear cause of seizures) will develop epilepsy. Those who do develop epilepsy are more likely to have a history of seizures in their family. This family history suggests that it is easier for them to develop epilepsy than for others with no genetic predisposition.

Epilepsy in which the seizures begin from both sides of the brain at the same time is called primary generalized epilepsy. Primary generalized epilepsy is more likely to involve genetic factors than partial epilepsy, in which the seizures arise from a limited area of the brain. Their risk is slightly higher than usual, not because they will “catch” it (that cannot happen) but because there may be a genetic tendency in the family that makes seizures and epilepsy more likely. Even so, most of them will not develop epilepsy. Epilepsy is more likely to occur in a brother or sister if the child with epilepsy has primary generalized seizures. Depending on the type of epilepsy and the number of family members who are affected, only about 4% to 10% of the other children in the family will have epilepsy.

Less than two people out of every 100 (2%) develop epilepsy at some point during their lifetime. The risk for children whose father has epilepsy is only slightly higher. If the mother has epilepsy and the father does not, the risk is still less than 5%. If both parents have epilepsy, the risk is a bit higher. Most children will not inherit epilepsy from a parent, but the chance of inheriting epilepsy is higher for some types.

About 80% of people with epilepsy treated with seizure medicines remain free of seizures for at least 2 years. Many never have any more seizures. The chances of becoming completely seizure-free are best if there is no known brain injury or abnormality, and if the person has a normal neurological examination and EEG.

In adults, 50-60% will be seizure-free after using their first seizure medicine. Another 11-20% will gain seizure control using the second medication, leaving 20-30% who is still having seizures.

Among those who are young when their epilepsy is diagnosed, 20% are “smooth sailors”—they start on medication and never have another seizure after the medication is stopped, even when they reach adulthood. About 50-60% of children become seizure-free with the first medication used, but 30% never stop taking seizure medicines. About 10% have a difficult time with “intractable seizures.”

The more time that passes without seizures, the greater is the chance of staying seizure-free. Over 50% of children outgrow their epilepsy. Twenty years after the diagnosis, three-quarters of people will have been seizure-free for at least 5 years, although some may still need to take daily medication.

Many people who are seizure-free for 2 to 4 years can stop taking their medications, under their epileptologist supervision, without having further seizures. However, about 30% of children and 30% to 65% of adults will have seizures again. You need to discuss this with your neurologist and agree on a plan for stopping gradually over weeks or months, not all at once. Currently, most neurologists and epileptologists in the United States and Canada consider withdrawing seizure medicines after someone has been seizure-free for 1 to 2 years.

Some people with uncontrollable seizures with tolerable doses of seizure medicine do eventually become seizure-free. The longer that you continue to have seizures after the diagnosis of epilepsy is made, however, the lower the chance that your seizures will stop. Your epileptologist will want you to try different medications or combinations of them. The more medicines that fail to control your seizures, however, the less likely it is that another medication regimen will fully succeed. Other kinds of treatments, such as vagus nerve stimulation or epilepsy surgery, may be very helpful for some people who continue to have seizures while taking seizure medicines.

The life expectancy of people who have epilepsy is the same as for anybody else if they are otherwise healthy. Things like a stroke because some people’s epilepsy or a brain tumor may die sooner from those conditions, of course.

A long-lasting convulsive seizure (called “tonic-clonic status epilepticus”) is a medical emergency. If not stopped within about 30 minutes, it may cause permanent injury or death. In addition, people with epilepsy can also die from inhaling vomit during or just after a seizure. This can be prevented if someone will turn the person onto one side when the seizure begins and ensures that the vomit completely comes out of the mouth. Seizures are hardly ever fatal, even if the person loses consciousness.

People who are not seizure-free need to be careful about possible accidents during a seizure. Death from drowning is more common among people with epilepsy. It can even occur in a tub with only a few inches of water, so people who have seizures probably should stick to showers instead of baths. If you have epilepsy, your doctor— and the agency in your state or province responsible for licensing drivers— will help, you decide whether it is safe for you to drive. You should also be careful on train or subway platforms and when walking near busy streets. However, with some planning, you should be able to lead a life that is both active and safe.

Epilepsy has affected people since the creation of man. It has been acknowledged since the earliest medical writings. We now understand that epilepsy is a common disorder resulting from seizures that temporarily impair brain function. Few medical conditions have attracted so much attention and generated so much controversy. Throughout history, people with epilepsy and their families have suffered unfairly because of the ignorance of others. Fortunately, the stigma and fear generated by the words “seizures” and “epilepsy” have decreased during the past century, and most people with epilepsy now lead normal lives.

Epilepsy is a disorder of brain and nerve cell function that may or may not be associated with damage to brain structures. Brain function can be temporarily disturbed by many things, such as extreme fatigue; the use of sleeping pills, sedatives, or general anesthesia; or high fever or serious illness. “Brain damage” implies that something is permanently wrong with the brain’s structure. This kind of damage may occur with a severe head injury, cerebral palsy, or stroke or it may occur long before birth, with malformation or infection. Injuries to the brain are the cause of seizures in some people with epilepsy, but by no means all of them.

Brain injuries range from undetectable to disabling. Although brain cells usually do not regenerate, most people can make substantial recoveries. Brain damage, like epilepsy, carries a stigma, and some people may unjustly consider brain-injured patients “incompetent.”

Many people mistakenly believe that people with epilepsy are also mentally handicapped. In the large majority of cases, this is not true. Like any other group of people, people with epilepsy have different intellectual abilities. Some are brilliant and some score below average on intelligence tests, but most are somewhere in the middle. They have normal intelligence and lead productive lives. There are some people, however, who have epilepsy associated with brain injuries that may also cause neurological impairments, including mental handicap. With only very rare exceptions, seizures do not cause a mental handicap.

Occasionally, problems associated with epilepsy, such as injury to specific brain areas or sensitivity to certain medications, can contribute to aggressive or confused behavior. Anxiety and depression may be slightly more common among people with epilepsy.

Single tonic-clonic seizures lasting less than 5-10 minutes are not known to cause brain damage or injury. However, there is evidence that more frequent and more prolonged tonic-clonic seizures may occur in some patients who injure their brain. Prolonged or repetitive complex partial seizures (a type of seizure that occurs in clusters without an intervening return of consciousness) also can potentially cause long-lasting impairment of brain function.

Some people have difficulty with memory and other intellectual functions after a seizure. These problems may be caused by the aftereffects of the seizure on the brain, by the effects of seizure medicines, or both. Usually, however, these problems do not mean that the brain has been damaged by the seizure. There may be a cumulative, negative effect of many tonic-clonic or complex partial seizures on brain function, but this effect appears to be rare. Most cases of epilepsy are not inherited, although some types are genetically transmitted (that is, passed on through the family). Most of these types are easily controlled with seizure medicines.

Generally, people with epilepsy have seizures and require medication for only a small portion of their lives. More than half of childhood forms of epilepsy are outgrown by adulthood. With many forms of epilepsy in children and adults, when the person has been free of seizures for 1 to 3 years, medications can often be slowly withdrawn and discontinued under a doctor’s supervision.

Previous PostWho Has Epilepsy? You’ll be Shocked…
Next Post Understanding the Emotional Aspect of Someone Who Suffers from Epilepsy