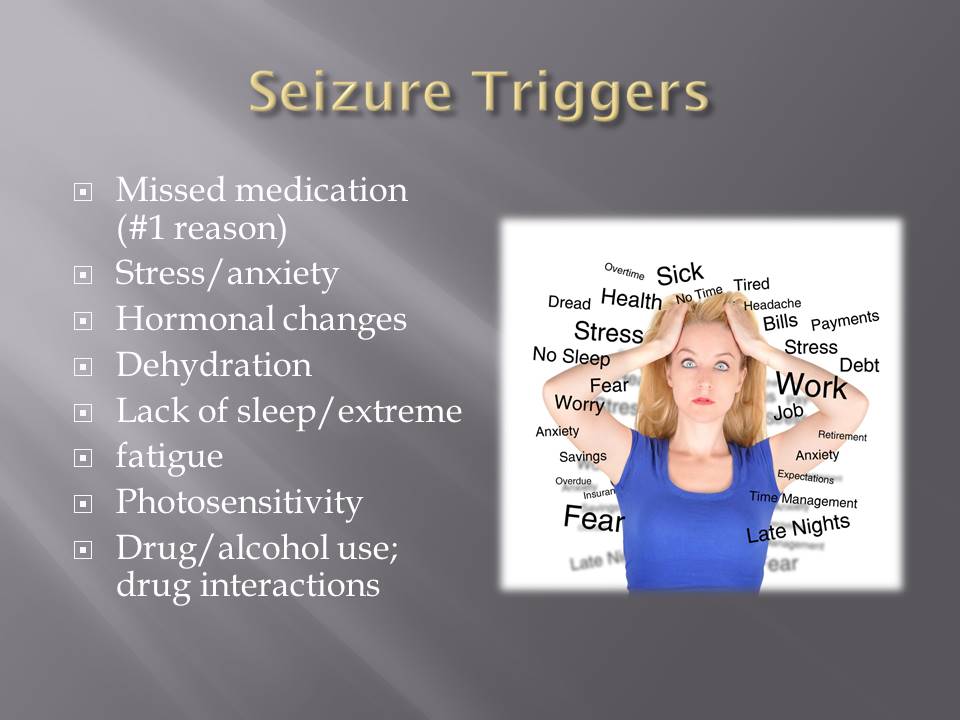 Triggers are situations that can bring on a seizure in some people with epilepsy. Some people’s seizures are brought on by certain situations. Triggers can differ from person to person, but common triggers include tiredness and lack of sleep, stress, alcohol, and not taking medication. For some people, if they know what triggers their seizures, they may be able to avoid these triggers and so lessen the chances of having a seizure.

What’s the difference between triggers and causes?

Triggers for seizures are not the same as causes of epilepsy. A trigger for someone to have their first seizure may be a stressful situation, but the underlying cause for that person to start having seizures may be quite different. Causes can be genetic or as a result of structural damage to the brain.

Because epilepsy can develop at any time of life, it can sometimes be difficult to work out why seizures have started. If you have a seizure, it may seem to make sense that there must be a particular cause, such as stress, or alcohol. However, the likelihood of having a seizure at some point may have been there already for you, and the stress or alcohol has triggered it.

For people who experience frequent episodes of seizures, certain triggers can help show their condition. For instance, some people may notice their seizures occurring during certain times or may be able to name triggers that bother them most. Here is a look at seven of the most common seizure triggers.

Sleep deprivation is seen as a possible trigger for seizures. In many cases, seizures are highly sensitive to sleep patterns. Since seizures are brought on by an increase in electrical activity in the brain, sleep patterns that are disturbed seem to have an inherent relationship with the onset of seizures. For some people, this change in brain activity may suddenly happen during deep sleep and the entire episode may happen while the person is asleep. It effects may be felt as daytime fatigue and concentration problems without ever knowing why.

Others may experience a seizure when falling asleep or when waking up. At the same time, seizures at night can not only wake some people up but also disrupt their normal sleep-wake cycle. Being chronically sleep deprived can also raise the potential for experiencing daytime seizures as well.

Alcohol consumed in small amounts does not cause seizures. But it has been studied that people who habitually consume substantial amounts of alcohol can elevate their possibility of seizures by suddenly decreasing or giving up consumption. Therefore, in cases where alcohol consumption is related to seizures, it is often in the state of alcohol withdrawal. This means the trigger for the seizure is not the drinking itself but the attempt to stay away from it.

The risk of having seizures will be heightened after having three or more alcoholic beverages. That is why people prone to suffering from seizures are advised to not drink alcohol.

Repeated alcohol withdrawal also has the potential to excite the brain and cause frequent episodes.

The same can be said of drug abuse. Recreational drugs can directly affect the brain and different drugs will have different reactions. For instance, all forms of cocaine use have the potential to interfere with normal brain activity and cause a seizure. Abuse of amphetamines and other stimulants can cause sleep deprivation and confusion and trigger an episode, while the active ingredients in marijuana can provoke seizures. Narcotics such as heroin, opium, morphine, and codeine have the potential of causing a severe lack of oxygen supply to the brain which in turn can bring on a seizure.

Drug-induced seizures can happen just before or as someone is overdosing or when withdrawing from drugs. The seizure occurs when the body’s system has reached the point of toxicity or overload.

Stress is relative to everyone and holds a different meaning for each individual. As such it becomes hard to measure stress levels. But stress is an expected and unavoidable part in everyone’s life. So as a common denominator, stress does demand the body’s reaction to challenging physical and emotional situations.

When this reaction happens feelings of worry, depression, frustration and even anger surface. Internally such stress causing factors release specific hormones that are connected to the nervous system. Areas of the brain that are involved in emotions and response to stress are activated by these hormones and excitability in these sectors can bring about a seizure.

4. Use of certain medications or supplements

When these medications are used along with others that are used by epilepsy patients, the drugs can interact with each other and raise the incidence of seizures. Even common medicines like aspirin can increase the unwanted side effects of seizure medicines or increase the frequency of seizures by altering the dosage of the medicine.

For epilepsy patients, even the use of herbal medicines should be administered under supervision to make sure that none of the active ingredients in either natural herbs or prescribed medicines interact with each other.

Other than over the counter medications, certain medications that have been prescribed for mental or psychological disorders can also trigger seizures if taken in a different dose than that recommended by their doctor. These can include various antidepressants and people who stop using barbiturates after regular use can also suffer from seizures.

Sometimes people may be sensitive to certain foods or food types, so it is best to avoid these foods. Common food allergens include wheat, soy sugar, and dairy, although any food can be a culprit. Sometimes food and other lifestyle choices can also aggravate an existing condition so it is best to be informed.

Some common food allergens and triggers include monosodium glutamate, a common flavor enhancer in packaged foods. Caffeine is another suspect that is found in coffee, tea, cocoa, chocolate and many soft drinks. Another one is theobromine which is a metabolite of caffeine and is present in tea and coffee.

Aspartame is a commonly used artificial sweetener that is used in many prepackaged foods. It is made from synthetically altered ingredients and is seen as a potential trigger for seizures.

Most of these foods are regarded as products that can excite the brain and irritate the nervous system. So eliminating these food chemicals from the diet can be helpful for people who suffer from seizures.

Carefully check labels for these foods, and if you are already consuming them, then stop their use.

Dehydration happens when the body loses more fluid than it needs for optimal body functioning. This is a very common trigger for seizures and can happen at any time. Electrolytes such as sodium and potassium help transport signals from one cell to the next but when electrolytes are out of balance, normal electrical messages can become mixed up which can and cause involuntary muscle contractions and sometimes to a loss of consciousness.

Seizures due to dehydration are more likely to happen at night-time since most people do not drink a lot of water after their evening meal. This may be to avoid waking up at night to urinate and so an person who may already be dehydrated can become acutely dehydrated at night. Another reason for dehydration at night is that even if people do drink water at nighttime, some may not be able to go for 8-10 hours at night without drinking more fluids.

Dehydration is more likely to set in for people who breathe through their mouth at night or are just heavy breathers. They may experience a seizure during the night or upon waking up.

It is true that every cell in the body needs sugar to work properly. When blood sugar levels fall seriously below normal, many bodily functions are impaired. A severe low blood sugar condition known as insulin shock can set in and can be very dangerous causing seizures or loss of consciousness. This specific trigger for seizures can be observed in diabetic patients where sugar levels need to be monitored carefully.

To better prevent the risk of having sudden seizures, people can try to get enough sleep at night, become more informed about relaxation techniques and stress management while also avoiding alcohol and drugs. Another lifestyle tip is to follow a healthy diet plan and avoid factors that can possibly trigger a seizure.

Previous PostWho Gets Epilepsy? These Risk Factors Give You a Higher Chance of Developing Epilepsy
Next Post The Difference Between Epilepsy and Seizures