Seizures: The Different Types and Their Symptoms 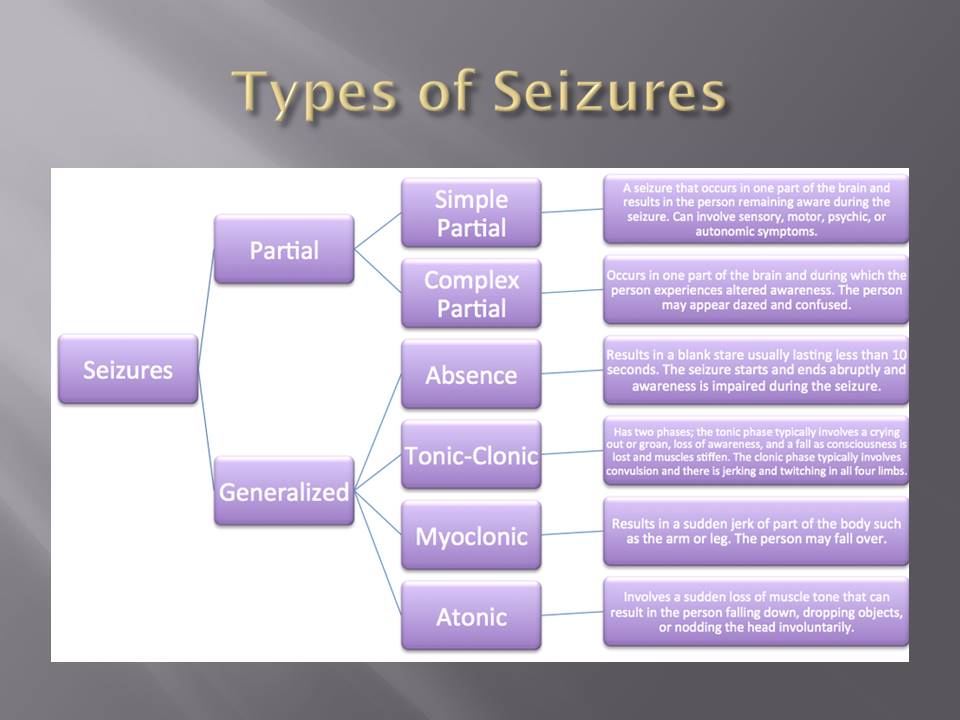 Epilepsy is a brain disorder that happens when certain nerve cells in your brain misfire. It causes seizures, which can affect your behavior or the way you see things around you for a short time.

There are about a dozen types of epilepsy, and the type you have plays a role in which kind of seizure you may have.

There are two main types of seizures:

These start in a particular part of your brain and their names are based on the part where they happen. They can cause both physical and emotional effects and make you feel, see, or hear things that aren’t there. About 60% of people with epilepsy have this type of seizure, which is sometimes called a partial seizure. Sometimes, the symptoms of a focal seizure can be mistaken for signs of mental illness or another kind of nerve disorder.

These happen when nerve cells on both sides of your brain misfire. They can make you have muscle spasms, blackout, or fall.

Seizures aren’t always an either-or thing: Some people have seizures that start as one kind, then become another. And it’s not easy to classify some of them: These are called unknown-onset seizures, and they can cause both sensory and physical symptoms.

There are six types:

These are the most noticeable. When you have this type, your body stiffens, jerks, and shakes, and you lose consciousness. Sometimes you lose control of your bladder or bowels. They usually last 1 to 3 minutes — if they go on longer, someone should call 911. That can lead to breathing problems or make you bite your tongue or cheek.

Your muscles have spasms, which often make your face, neck, and arm muscles jerk rhythmically. They may last several minutes.

The muscles in your arms, legs, or trunk tense up. These usually last less than 20 seconds and often happen when you’re asleep. But if you’re standing up at the time, you can lose your balance and fall. These are more common in people who have a type of epilepsy known as Lennox-Gastaut syndrome, though people with other types can have them, too.

Your muscles suddenly go limp, and your head may lean forward. If you’re holding something, you might drop it, and if you’re standing, you might fall. These usually last less than 15 seconds, but some people have several in a row. Because of the risk of falling, people who tend to have atonic seizures may need to wear something like a helmet to protect their heads.

People who have the Lennox-Gastaut syndrome and another kind of epilepsy called Dravet syndrome are more likely to have this kind of seizure.

Your muscles suddenly jerk as if you’ve been shocked. They may start in the same part of the brain as an atonic seizure, and some people have both myoclonic and atonic seizures.

You seem disconnected from others around you and don’t respond to them. You may stare blankly into space, and your eyes might roll back in your head. They usually last only a few seconds, and you may not remember having one. They’re most common in children under 14.

Doctors break these into three groups:

They change how your senses read the world around you: They can make you smell or taste something strange and may make your fingers, arms, or legs twitch. You also might see flashes of light or feel dizzy. You’re not likely to lose consciousness, but you might feel sweaty or nauseated.

These usually happen in the part of your brain that controls emotion and memory. You may lose consciousness but still look like you’re awake, or you may do things like gag, smack your lips, laugh, or cry. It may take several minutes for someone who’s having a complex focal seizure to come out of it.

These start in one part of your brain and spread to the nerve cells on both sides. They can cause some of the same physical symptoms as a generalized seizure, like convulsions or muscle slackness.

Information was acquired from webmd.com

Previous PostSeizures and Migraines: The Connection Between The Two
Next Post Epilepsy Drugs Increase People’s Risk of Dementia by Up To 60% By Breaking Down Brain Cells

2 thoughts on “Seizures: The Different Types and Their Symptoms”