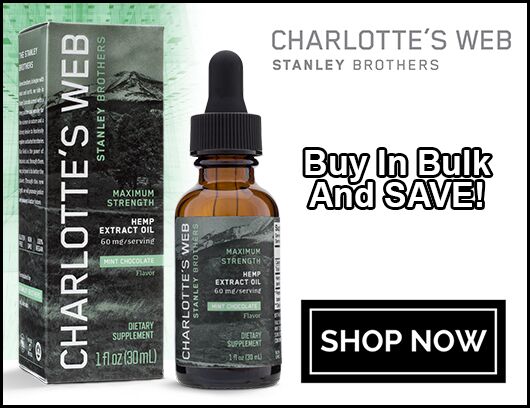 In an effort to continually offer new and beneficial services The Complete Herbal Guide has formed a strategic partnership with Charlotte’s Web Hemp Extract CBD Oil.

Once upon a time, there was a little girl named Charlotte. She suffered from Dravet Syndrome — a very rare form of epilepsy. And with that, her fairytale ends and her story begins… A story of a little girl’s journey of recovery using cannabis and the brothers that created Charlotte’s Web.

Only 3 months after Charlotte Figi was born, she had her first seizure. One that lasted a full 30 minutes. As Charlotte got older, her seizures increased in frequency and severity, up to the point where she was having multiple seizures a day, each lasting up to four hours. At age two, Charlotte started showing signs of severe cognitive decline and Autistic type behavior. She would often have an aggressive outburst, injure herself and be reluctant to make eye contact with people around her. By age three, Charlotte was wheelchair bound, stopped talking and couldn’t eat.

Eventually, after many, many doctor’s visits, Charlotte was finally diagnosed with Dravet’s syndrome — an extremely rare and debilitating form of epilepsy.

Even though Charlotte’s parents, Paige and Matt Figi now knew WHAT they were dealing with, they did not know HOW to deal with it. Charlotte was getting increasingly worse, despite at one time being on seven different types of heavy-duty medications. By age five, Charlotte was suffering from up to 300 grand mal seizures a week — her body so ravaged by them that her heart even stopped several times. It got so bad that her doctors and parents eventually decided to put her in a medically induced coma to give her body a chance to rest and recuperate, even going so far as to sign a do-not-resuscitate order in case something went wrong.

Charlotte’s doctors told her parents that there was not much more that can be done for her… or was there?

Charlotte’s grandfather started reading about several success stories and testimonials from other parents that were using cannabis to help treat their children. There was one story that especially stood out — that of another boy with Dravet’s. The family decided that since their doctors made it clear that all clinical treatment options have been exhausted, what do they have to lose by trying cannabis? So, succeeding in getting hold of some R4 extract cannabis oil for Charlotte, they tried it and the results were almost immediate — going from seizing 300 times a week to NO seizures that entire first week after trying it out.

“I literally see Charlotte’s brain making connections that haven’t been made in years,” — Matt Figi.

After that first dose, Charlotte seized less and less frequently. Her parents, knowing that they were onto something, started looking for someone that could supply them with cannabis oil on a longer-term basis. Paige and Matt decided to contact the owners of a large medicinal marijuana dispensary to tell them their story in the hope that they will be able to help.

The Stanley Brothers are medical marijuana growers and dispensers from Colorado. They created a hybrid strain of medical marijuana (a mix between industrial hemp and low THC cannabis) which is unique in that it maintains a constant 30:1 of cannabidiol (CBD) to tetrahydrocannabinol (THC) ratio. Jokingly called “Hippie’s Disappointment” because of its low THC and high CBD content, the set out to create a strain of cannabis that has all the medicinal properties associated with the plant, but none of the psychoactive effects associated with other strains of medical marijuana. And it is this low THC content combined with a high level of CBD that makes this strain ideal for use in children such as Charlotte.

After Paige and Matt started giving this new hybrid strain of cannabis to Charlotte, they started seeing immediate results. This strain worked so well on stopping this little girl’s debilitating seizures, that the brothers decided to change the name to Charlotte’s web in honor of her.

Soon after, Heather Jackson heard of Charlotte’s Web and started administering it to her son Zaki — who suffers from a debilitating form of early childhood epilepsy called Doose syndrome — also to great success. Their stories became international news and the queries started pouring in from parents wanting to know more and wanting to find out if Charlotte’s Web is a viable form of therapy for their kids.

And it turns out that it is. The growing number of stories of children that have been helped by Charlotte’s web and similar CBD oils attest to the success of CBD as an effective form treatment for a variety of illnesses. Charlotte herself is living a healthy and normal life, with her seizures being reduced to twice or three times a month and being able to eat, walk and talk again.

Because of stories like Charlotte’s, there is an increased awareness surrounding the use of medical marijuana and low THC strains such as Charlotte’s web — especially for the use on children. More and more patients and families are educating themselves on the benefits of CBD and turning towards it for a variety of debilitating illnesses — to great success. Some parents are even moving to states such as Colorado where medical marijuana has been legalized so that they can legally give it to their kids.

Similarly, more and more doctors and researchers are legitimizing the use of cannabis as a viable therapeutic option — Dr. Sanjay Gupta, neurosurgeon, and professor of neurosurgery, probably being the most open of these. After hearing about Charlotte’s case, he very publicly made a 180 degree turn about his stance on medical marijuana stating:

“It doesn’t have a high potential for abuse, and there are very legitimate medical applications. In fact, sometimes Marijuana is the only thing that works… It is irresponsible not to provide the best care we can as a medical community, care that could involve Marijuana. We have been terribly and systematically misled for nearly 70 years in the United States, and I apologize for my own role in that.”

In addition, an increasing number of scientific studies are also now showing that CBD can regulate epileptic seizures without the side effects that are usually associated with prescription medication.

HOW DOES IT WORK?

The human body, naturally producing cannabinoids, has cannabinoid receptors — CB1 and CB2. CB1 receptors are mainly found in the brain and are responsible for dealing with things like pain, movement coordination, cognitive abilities (thinking, memory), appetite and emotions. CB2 receptors are more commonly found in the immune system and have an effect on things like pain and inflammation.

When CBD enters the body, it stimulates the body to create more of its own cannabinoids, thus producing the beneficial effects seen in so many patients.

IS IT RIGHT FOR YOU OR YOUR CHILD?

Because of the way in which CBD found in strains such as Charlotte’s web acts on the body, the potential uses are many and includes:

Because it has none of the psychoactive properties associated with other strains of medical marijuana, it is ideal for children and people who do not want their daily activities to be limited or impaired.

Have you had experience with CBD oil or medical marijuana? I’d love to hear from you in the comments below!